In 2012, I was privileged to spend time talking with a Pastor in the US, Dr Clarice Fluitt, over a number of weeks. In our discussions, she would regularly say to me, “As Christians our role is to be ‘the antidote to the antichrist’”.

In other words our lives must reflect God whom we worship and serve. We must be prepared to stand against the forces of evil and unrighteousness, which vehemently oppose God and in particular His Son, Jesus Christ. We are living in a time where the forces of darkness are increasing in intensity and evil acts are escalating across the globe. Jesus is one day going to return again and supernaturally collect His saints.

Those who don’t believe in Him will be left behind in unimaginable darkness. A man will arise who will appear to fix the world’s problems but will hold those left behind captive to a most horrific fate. This man will be the antichrist in the flesh not just an ‘invisible force of evil’. While the title sounds confronting it really needs to be to get people’s attention.

This is about the battle between good and evil, God versus the devil and our eternity in heaven or hell. It is ultimately a battle for souls. I have even seen a computer game where the ‘baddies’ have to collect souls. The one with the most souls, wins.

It was actually a four year old child I saw playing this game on his mother’s phone. Indoctrinating the young!!….All of us living on planet earth are caught in this battle. Jesus who created the heavens and the earth, came as a baby and spent thirty-three years here to experience life ‘as we know it’ and to show the love of the Father to mankind. He made a way out of death for us when He died on that craggy cross. He is no longer on the cross or in the grave but He is risen and lives.

My life is a testimony to this fact. My walk with the Lord has not been usual. At the age of fifteen I failed History and English in my Grade 10 exams and had to repeat the year, which was an awful embarrassment. For English we studied Macbeth, which was my first experience with Shakespeare. I found it extremely creepy and had real difficulty studying it. The level of violence, death and the witches and their spells upset me but of course there was no one to complain to about it.

After many years of research I have now discovered that my ancestors created the history I failed and that King Malcolm III (1058-1093), "Canmore", who was the last king standing in Macbeth, is my 27th great grandfather. I honestly thought that it was fiction!!! Not so. This is the tip of the iceberg.The man who wrote the Shakespearean plays was not an actor but the son of a queen and should have been king but was denied it as she lay on her deathbed.

My story started with something that each of my grandmothers gave me. My father’s mother gave me some jewellery and a little bible that had belonged to his cousin who had died not long before I was born.

My mother’s mother gave me a family tree which went back to the 1700’s but which on further investigation led me to the settlement of the United States and back to King David.

Together they were like a chemical reaction, which set off a chain of events. It is history that has never been properly exposed or expressed for whatever reason. I know that it is time for this history to be exposed because it gives background to how the world has become the way it is and why it is now teetering on the brink.. and the main players down through the ages who are responsible for it.

I have written of experiences I have had with various people and institutions but have not mentioned them by name because it is the unseen influences that have been the driving forces behind the situations I describe.

Ephesians 6:12 says, “For we do not wrestle against flesh and blood, but against principalities, against powers, against the rulers of the darkness of this age, against spiritual hosts of wickedness in the heavenly places.”

In other words, our problem is not with the people but with the spiritual influences that we all have attached to us from generations before us. Cities also have ruling spirits over them, which can create an atmosphere of depression or violence or hopelessness.

It has been my aim to highlight some of these influences as best I can and offer hope that they can be defeated in our families, communities, cities and nations. Freemasonry is one of the most insidious because it fronts as a benevolent men’s club but it is actually a humanistic religion, which is an amalgamation of various belief systems.

It is a global network that feeds information back through its various channels to headquarters in overseas countries. It controls councils and governments and it is an antichrist organisation, which purports to have Christian roots but nothing could be further from the truth.

It is several years since I published the book and the only correction needed is page 83 where the printers made a typographical error – “Robert Dudley was not Master of the House”, but Master of the HORSE.

Otherwise all the other information has only been confirmed and added to. Please watch this website for the updates. I have written this book to expose the hiddenness of significant people who have been complicit in creating and framing the society we now live in four hundred years later.

I believe that we are living in the very end of the end times. Jesus is coming again and I don’t want you to miss out on eternity with Him.

No tears, no sorrow, no fear, no more threat of death.

Eternity with the enemy will be “as hot as Hades”.

It is our choice. Eternity is a long time.

The Story Behind Antidote to the Antichrist 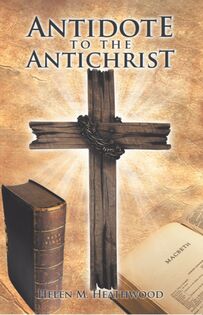 How I Discovered the Real Shakespeare

This Book is available through

Or order direct from us

How I Discovered the Real Shakespeare