Queen Elizabeth’s life was in danger from the time of her birth, exponentially so when she ascended to the throne and assassination could come by either physical or spiritual means.

Magical threats had to be quashed with as much ferocity as physical ones, and in such an environment of paranoia, nothing could be dismissed as coincidence- particularly when sorcery, which operates by the engineering of coincidence was involved.

To further complicate matters, Queen Elizabeth administration was too financially strapped to effectively to effectively suppress Catholicism in the country.

This meant that the threat of assassination could never be fully circumvented, making John Dee’s services in protecting against magical attack as critical as Walsingham’s in espionage.      Page 86 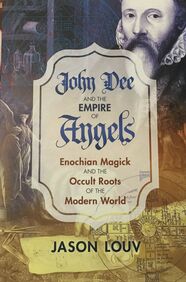 This book should be compulsory reading for anyone wondering why the world is the way it is. This is essential reading.

Christ is coming, and with him he shall bring an Empire of Angels.   Page 462.

Even though Aleister Crowley the man is long dead, Crowley the symbol and the presence lives on, not only for his followers but in popular culture, which is which now is Western Culture;

from the cover of the Beatle’s Sargent Pepper’s to The Rolling Stones to David Bowie to Led Zeppelin to 1000 lesser musical acts; through the Baby Boomers, whose generation enacted the philosophy Crowley had developed en masse even if they were not aware of doing so.

Thelmer was transmitted to them not by Crowley directly but through guiding figures like the aforementioned musicians as well as Timothy Leary (who believed his role was to carry on Crowley's work) and many others.

The boomers are currently the elders of the Western world, and culture now conforms more to the vision put forth in The Book of the Law - concerned with individual supremacy, will, sorcery (as in personal and corporate branding, the creation and manipulation of reality through digital media, corporate idolatry, etc.), the end of sexual taboo, the end of gender, atheism, constant preoccupations with childish pursuit and identities, and even outright Luciferianism-  than it does that of Christianity by far.       Page 362

My people are destroyed for lack of knowledge:   Hosea 4:6  (KJV)

In 1638, a poem published in Moray's hometown of Edinburgh proclaimed, ‘We be brethren of the Rosie Crosse: We have the Mason word and second sight. Things for to come we can foretell aright…. " (Second sight is a well-known phenomena by which certain Scottish families are believed to possess inborn psychic abilities, publicized in Walter Scott’s 1817 Rob Roy.) References connecting the Masons to the Rosicrucians continued throughout the 17th century, including the establishment of Rose Croix degrees in the Scottish Rite.

Masonry is itself concerned with the same themes Dee and his forebears were, and is an expression of the truths of the adepts that any man, of any background, provided he is a worthy brother, should be able to enter and visualise within his own life at a deep level. And far beyond the obscure writings of cloistered Hermeticists, Masonry has formed the backbone of Western civilization for over three centuries.                                  Page 337

This secret society had supposedly been founded by the mythical Christian Rosenkreutz who had travelled throughout the world seeking for knowledge in vain before finding inner illumination and proceeding to found an elite order of magicians or ‘Invisibles’ who would maintain anonymity in the culture at all times, blending in with their surroundings and proclaiming nothing but the ability to heal the sick, and who possessed the keys of advanced knowledge.

Indeed, not only would the order tear down the Antichrist Pope,

it would also bring an end to the world and enter the world, returning it thereby to perfected state of Adam in the garden.

The Man who should have been King

In my own words - Francis Bacon

Enochian magic was fabricated initially by John Dee and his associate Edward Kelley. Together, they contacted the spirit world with various spirits giving them revelations. Some of them were illuding spirits which led them off track (surprise, surprise).

But from Dee’s writings, a form of magic was developed which is part of the higher levels of Freemasonry.

The system claims to relate to secrets contained within the apocryphal book of Enoch and consists of complex language and alphabet, magic squares, and cubes. It is complex and very powerful.

Adept Rosicrucians and Freemasons have used these magical texts—The Key of Solomon and the Lesser Key of Solomon – for years (to do just that) to bind, loose, and control the seventy-two stars (demons) over the nations.

This is a counterfeit version of the key of David

The keys of the kingdom are also associated with the key of David.

The depth of this counterfeit and deception knows no bounds. It is just so curious that they use this scripture where it suits their purposes, and they obviously know the power in it but totally reject anything to do with Jesus.

Interestingly, the witches in Macbeth used a mirror for scrying in one of the scenes in which apparitions of kings and the descendants of Banquo appear.

This is an example of Enochian magic redesigned to legitimise, make normal, and condition people into believing that this stuff is okay. It seems to be a precursor to all the ‘mirror, mirror on the wall’ fairy tales,

Please know that I am just giving an overview of some of these practices. I have not wanted to delve too deeply myself but have tried to give a bit of insight into what these people are involved in and maybe help explain why you haven’t had the breakthrough you have been praying for, for years.